Off to the boat show

Carl has spent the last four days touring the Scottish Highlands on his Harley Davidson motorcycle. The NorthCoast 500 is a bucket list ride that Carl has now ticked off. He rode a lot more than 500 miles, that was just the route. Overall he’s averaged just under 400 miles a day for the last four days so when he got home last night he was whacked.
We are now packing again tonight as first thing tomorrow we are setting off for four days in Poole, Dorset, pulling in a day out at the Southampton boat show.

Poole has been a favourite place of ours for years, especially when our kids were younger, we spent many holidays down there when we had a touring caravan. It will be really nice to get back down there to see how the place has changed.

We are obviously looking forward to the boat show and will hopefully pick up a bargain or two in the clothing sections as we are booked on a charter in just a few weeks and need some new offshore coats. Watch this space.

We will be putting a video together from the trip so that should be online initially for a Patreon supporters a few days before general release. If you want to be one of the earlybird viewers then you can become one of our Patrons by clicking HERE!

Have a great week. 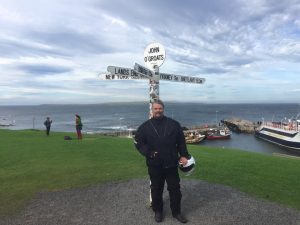